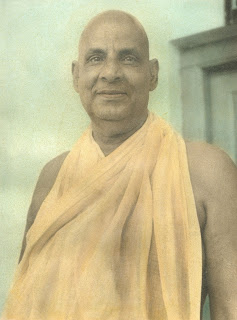 A Beacon-Light to the World

The liberated sage, like unto holy waters, purifies others by mere sight, touch and the utterance of his name. Sometimes he remains unnoticed, while sometimes he becomes known to those who desire welfare. He eats food offered to him by pious devotees and burns up their past and future evils and impurities. A liberated sage or a saint is the ultimate source of knowledge of the soul. To keep company with a jivanmukta (liberated sage) for even a minute is much better than to rule a kingdom - his very presence is so thrilling and inspiring. Seek his company and evolve. Serve him with faith and devotion.

A jivanmukta may give up his body in any place, at any time. Just as the falling leaves and fruits of a tree will not affect the tree itself, so also, the shedding of the body will not affect the Self which survives like the tree. His vital airs do not depart elsewhere for transmigration. They are absorbed in Brahman after the exhaustion of his destiny, the results of past actions that have already begun to bear fruit. He is freed from further births. The jivanmukta is freed from the trammels of mind and matter. He is absolutely free, perfect, independent. He is absolutely free from hatred, lust, cares, worries and anxieties. Everybody surely desires this state of beatitude or final emancipation. It is the final goal of life, the end of all human aspirations.

There, at the summit of the hill of eternal bliss, you can see the sage or jivanmukta or a full-blown yogi. He has climbed the stupendous heights through intense and constant struggle. He did severe, rigorous spiritual practices. He did profound meditation. He spent sleepless nights. He kept long vigils during several halting stages. He persevered with patience and diligence. He surmounted many obstacles, conquered despair, gloom and depression. He is a beacon-light to the world now. Remember that he was also rotting in those days in the quagmire of births and deaths, like yourself. You can also ascend to that summit if only you will.