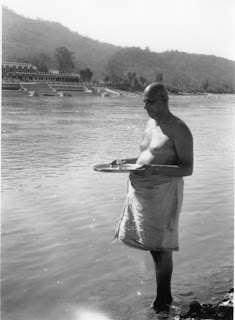 Bhakti is love for the sake of love. The devotee wants God and God alone. There is neither selfish expectation nor fear. Is the son afraid of his father though he is a judge? Is the wife afraid of her husband? So also, a devotee entertains not the least fear of God. The fear of retribution vanishes in him. He feels, believes, conceives and imagines that his chosen deity is an ocean of love (prema).

Bhakti transmutes man into divinity. It intoxicates the devotee with divine love and gives him eternal satisfaction. It makes him perfect, weans his mind from sensual objects and makes him rejoice in God.

Emotional excitement is not devotion to God. Devotion is pure love, Fanaticism is not devotion, but frenzy, mere excitement. Bhakti is not mere emotionalism, but is the tuning of the will as well as the intellect towards the divine. It is supreme love of God, and later blossoms into knowledge of the self. It leads to immortality. Bhakti is the direct approach to the ideal through the heart. Love is natural to everybody.

Bhakti can be practised under all conditions and by all alike. Study of the Vedas (the revealed scriptures of the Hindus, containing the Upanishads), learning, austere penance and brilliant intellect are not needed for the attainment of bhakti or devotion. What is wanted is constant and loving remembrance of God, coupled with faith. That is the reason why the path of devotion is available for everyone.

Bhakti is easier than any other way of approach to God. In jnana (self-knowledge) and yoga, there is the risk of a fall. In the path of devotion, there is no risk as the devotee receives full support and help from God.
Posted by Swami Suryadevananda at 1:00 AM