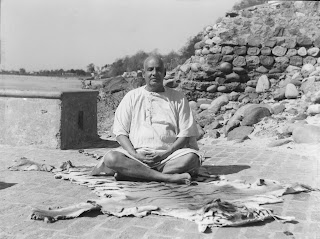 A vritti is a 'whirlpool' in the mind-lake
Notes and Commentary
Vritti literally means a whirlpool. It is a thought-wave in the lake of chitta. Chitta is the mind-stuff or mental substance. It takes various forms. These forms constitute vrittis. It gets transformed or modified (parinama). These transformations and modifications are the thought-waves, whirlpools or vrittis. If the chitta thinks of a mango, the vritti of a mango is formed in the lake of chitta. This will subside and another vritti will be formed when it thinks of milk (milk-vritti).
Countless vrittis are rising and subsiding in the ocean of chitta. These vrittis cause restlessness of mind. Why do vrittis arise from chitta? Because of samskaras (habits) and vasanas (desires). If you annihilate all desires, all vrittis will subside by themselves. When a vritti subsides it leaves a definite impression in the subconscious mind. It is known as samskara or latent impression. The sum-total of all samskaras is known as karmasaya (receptacle of works). This is sanchita karma (accumulated work). When a man leaves the physical body, he carries with him his astral body of seventeen tatvas and the karmasaya as well to the mental plane. This karmasaya is burnt by the highest knowledge obtained through asamprajnata samadhi.
Modification is a vritti in the mind. When the vritti subsides it assumes the subtle state of potency or samskara in the chitta or subconscious mind. This potency again becomes a vritti under suitable conditions, when the mind comes in contact with sensual objects or through memory of objects from stimulus within. There are degrees in the vrittis or modifications that arise from the mind. You can check or control the lower vritti with the help of higher vrittis or transformations. For instance, anger is a lower vritti or a vritti of a lower degree. Kshama (forgiveness) is a vritti of a higher degree. With the help of kshama you can control the lower vritti, anger. You can become a yogarudha (one who is established in yoga) by controlling all the vrittis of the mind. The yogi does not annihilate himself by controlling all the vrittis or modifications of the mind. By suppressing the transformations of the mind he acquires great powers. He becomes an (adept or perfect being) siddha.
Although the mind is one, it passes into many conditions or states, as it is made up of three qualities (gunas) satva, rajas and tamas. All these qualities enter into a variety of combinations. The modifications or vrittis of the mind are also various. Peace of mind is a satvic vritti. Lust is a rajasic vritti. Laziness is a tamasic vritti.
Posted by Swami Suryadevananda at 1:00 AM