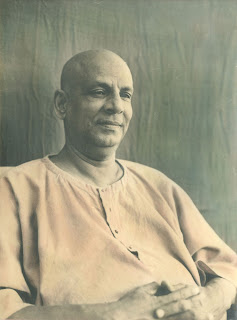 It is in the nature of man to strive for happiness, but all the happiness which he can gain by his actions is only of limited duration. The enjoyments of the senses are transient and the senses themselves are worn out by too much enjoyment. Further, sin generally accompanies these enjoyments and makes men unhappy beyond comparison.
Even if the pleasures of the world are enjoyed as much as their nature permits, if they are as intense, as varied and as uninterrupted as possible - old age still approaches and with it, death. And the enjoyments of heaven are in reality not more enviable than these pleasures of the senses. They are of the same nature although more unmixed and durable, and they come to an end for they are gained by actions. Actions are finite and their effects must also be finite.
In one word, there is necessarily an end to all these enjoyments and what avails us to strive for pleasure which we know cannot sustain us beyond the moment of enjoyment? It is therefore the nature of the man to look out for an unchangeable, infinite happiness (ananta sukha) - which must come from a 'being' in which there is no change if such a being can be found. It is only from him that man attains an unalterable happiness. And if this be so, this 'being' must become the sole object of all his aspirations and actions.
This 'being' is not very far - he resides in your heart. He is the sakshi chaitanya (witness consciousness) who witnesses the activities of your buddhi (intellect). He is the nirguna Brahman of the Upanishads.
- - -
TRUE BEING. True being is that which knows no bounds, neither physical nor intellectual. It is unbounded, spiritual being. The nature of approach must befit the nature of the object approached. The pathway can be known only when the destination is known. The indivisible, absolute and conscious nature of the reality signifies that life on earth should be lived according to rigid laws - laws of dispassion towards external existence and active awareness of the Self as an unlimited being. It also shows that all forms of physical and even intellectual indulgence are deviations from eternal truth. It shows that every desire for objectification of consciousness is suicidal in the real sense.
Posted by Swami Suryadevananda at 1:00 AM